Men explain things to me 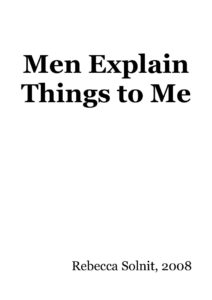 Yes, guys like this pick on other men’s books too, and people of both genders pop up at events to hold forth on irrelevant things and conspiracy theories, but the out-and-out confrontational confidence of the totally ignorant is, in my experience, gendered. Men explain things to me, and other women, whether or not they know what they’re talking about. Some men.
Every woman knows what I’m talking about. It’s the presumption that makes it hard, at times, for any woman in any field; that keeps women from speakingup and from being heard when they dare; that crushes young women into silence by indicating, the way harassment on the street does, that this is not their world. It trains us in self-doubt and self-limitation just as it exercises men’s unsupported overconfidence.

This entry was posted in CONSTRUCTION DES MASCULINITES. Bookmark the permalink.