Posted on 30 avril 2020 | Comments Off on Grotesque lie zine 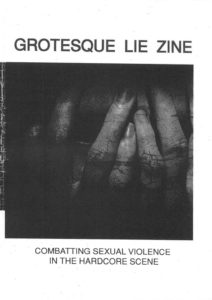 My name in Chris. I sing in the band Wake of Humanity from Seattle, WA. We have a song called Living in the shadow of a grotesque lie. […] We live in an abysmal time, rife with toxic masulinity dictating our country’s capitalist agenda which pours over to almost every other nation on this planet. Our small diy punk/hardcore/metal/whatever music scene is no exception to the fallout from such a construct. Everyday we learn of another cool guy. band member, shitty dude that is accused of sexual abuse. Some progress has been made in terms of awareness around these issues, but we have a long way to go.

This entry was posted in CONSTRUCTION DES MASCULINITES. Bookmark the permalink.