Association is not causation 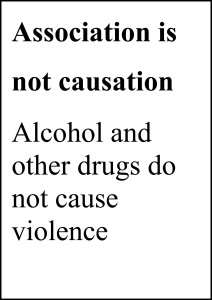 Alcohol and other drugs do not cause violence

The “demon rum” explanation for violence and abuse in the home is one of the most pervasive and widely believed explanations for family violence in the professional and popular literature.
It is our contention that […] there is little empirical evidence to support the claim that alcohol and drugs act as disinhibitors and are of primary importance in explaining family violence. Stated another way, there is little scientific evidence to support the theory that alcohol and drugs such as cocaine and crack have chemical and pharmacological properties that directly produce violent and abusive behavior. Evidence from cross-cultural research, laboratory studies, blood tests of men arrested for wife beating, and survey research all indicates that although alcohol use may be associated with intimate violence, alcohol is not a primary cause of the violence.